An Interview with Tom Arnold 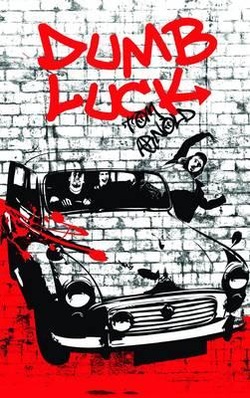 Who
Tom Arnold is the author of Dumb Luck - a gritty crime thriller with a dark slice of humour running through its centre. It’s published by Byker Books.This is his first published novel but the follow-up – Dead Stupid is in the pipeline. He lives in Chester with his wife and kids and mainly changes nappies in his spare time. He’s just the right side of forty (For older readers AT would like to point out he's not making any assumptions about which side of 40 Tom means!) and already has the soundtrack to Dumb Luck in the bag – he just needs someone to turn it into a movie.

Why
Since I was a kid I always wanted to write. Had to Write. Probably the same as a lot of people. I wrote my first “book” when I was about ten. It was a fairly demented attempt at Sci-Fi. I think I was big into Star Wars at the
time. Either way – I wrote up this ten page “masterpiece”, drew up a front cover with loads of exploding space ships and aliens with machine-guns (as I say – I was big into Star Wars at the time) and stapled the whole thing together and presented it to my family.No-one seemed overly impressed.However – I still kept it and it’s now slowly gathering dust at the bottom of a filing cabinet. But – it was a start.

With time – I started to write more short stories and experiment a little with various writing styles until I discovered my elusive writing  “voice”.Like everything – I think it’s just practice and a constant honing of your style really.

So - writing has always been a cathartic and very necessary process for me. If I don’t write – then I get edgy. Even if no-one read my work – I’d still churn it out. Having said that – it’s good when you get feedback from strangers who actually like your writing.

How
I’ve written about four complete books and have another three on the go currently. It’s the same with reading books.I generally have at least three or four that I read at the same time. I can’t seem to commit myself to just one story for long enough. Unless it is a very addictive novel.

The sequel to Dumb Luck – my published novel with Byker Books is nearly complete and that’s been a lot of fun to revisit those characters – Micky and dim-witted Rezza especially. And my other novels – many of them were written before Dumb Luck and were part of the learning process of what works and what doesn’t. One day I’d love to go back and re-edit them.Hack them down by about 40,000 words!But it’s finding the time to do it.I hate editing.  I hate an
editor telling me what to remove –what doesn’t work – where continuity is lost.  I know it’s a necessary evil – I just find it boring.The imagination is not involved. The joy of a new scene – the thrill of a plot change you’ve curveballed in – well – that’s just not there. It’s just hard boring slog.

I have a zombie novel I am half way through which is great fun (and probably just a selfish indulgence) and a rather straight forward crime thriller – along the
lines of the Red Riding series by David Peace.  I’ve also got a more commercial thriller in the pipeline which has been great to get stuck into.But the research can be a killer.

I usually start with a vague notion of where a novel is going and a basic plotline in my head. Then I just see where it goes.So most of the time I don’t know what’s going to happen until that day when I write it.It keeps it fresh and often surprises me.I find that I do most of my plot updates in my head whilst I am going for a walk or listening to my ipod on a train or plane.

If I am left to it – I can write a book in about three weeks. I wrote Dumb Luck in three weeks. However – I got up at seven in the morning and wrote like a demon ‘til ten at night. It was insanely addictive but a little crazy. I couldn’t do that now. Kids, work and the logistics of life just wouldn’t allow it.

When
My best writing is generally late at night locked away in my study with some music on. I always need music on to concentrate.Usually something not too intrusive but just enough to let you enter your writing rhythm. Sigur Ros works well for me as I can’t understand a word they’re saying – so it doesn’t distract.Generally – I go through a particular record on repeat whilst I write a novel and then discard the album for a few years immediately after.

If I’m finding it hard to write and the brain needs warming up.I just go for it and write anyway until I hit a decent rhythm. Sometimes I’ll end up deleting the whole lot except for a few lines. But at least those lines will be worth it.

Ideally – I write every day. Even a few paragraphs. But the realities of life have a habit of getting in the way of that. I don't beat myself up if that happens. That’s just the way it is. But...I set some targets to motivate myself.Or I’ll never complete anything! These days – I make time very late at night. Maybe ten at night til midnight. As that’s the only free time I have. So it can be brutal. But I wouldn’t do it if I didn’t love it.

What
There are elements of your life and people you’ve met along the way in your books – of course there are. But –I also grew up watching The Sweeney, The
A-Team and playing tonnes of shoot-em up computer games as a kid. So it’s no surprise that the whole lot meshes together into a big crazy heap of a
book.

I don’t think you have to experience everything personally to write effectively about it. You just need a good imagination.Look at Stephen King. But – of course – if you can write authentically about places and people you know about first hand – that can help. But I don’t let it get in the way of a decent story.That’s what imagination is for!

Finally
At the moment I’m reading a few books. My sister (Sarah Alderson) recently got published by Simon and Schuster.So I’m reading her book – Fated.
It’s got shapeshifters and “unhumans” in it – so I’m enjoying that.I’ve nearly finished “The Generals” which is a historical novel covering the rise of Wellington and Napoleon and mainly has lots of war – so that’s entertaining.And I’ve started Cloud Atlas again for the umpteenth time but am going nowhere fast with it really.This happens a lot.

I’m a massive fan of Ian M Banks. Possibly the most gripping creative Sci-Fi out there.And the Wasp Factory – that was pretty mindblowing as well.Absolutely awesome when I first read that.The best debut novel ever…probably.

“The Damned United” by David Peace just blew me away. But if you’re after something a little different. Check out “Monster” by Sanyika Shakur. It’s an autobiography by an LA gang member and pretty mental stuff. For lighter humour along a crime theme – check out Big Trouble by Dave Barry.


Dumb Luck by Tom Arnold is available to buy here