An Interview with Darren Sant 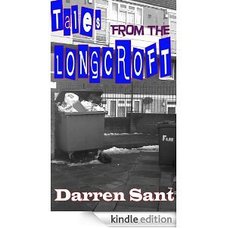 Who
Darren Sant is a 42 year old writer from Stoke-on-Trent. He found his muse and his wife in Hull and is now a fully paid up member of the Hull literary Mafia that includes the likes of Nick Quantrill, Nick Boldock and Allen Miles. Darren calls Hull home and despite the bribes he won’t be leaving anytime soon.

Darren is the author of Tales From The Longcroft Estate which is an ongoing series of stories set on the same run down housing estate.  He describes the series, depending upon his mood as social realism or Shameless
with heart.

His short fiction has been published at some very classy websites including Thrillers, Killers ‘N’ Chillers, Shotgun Honey, The Flash Fiction Offensive, The Killing Pandemic, At The Bijou and Flash Jab Fiction.  He has been published in print by: Byker Books, Pill Hill Press, Guilty Conscience Publishing, Infinity Publishing and Bathroom Readers’ Press.

Why
The first time Mrs Hobbs sat us down to listen to stories in junior school a little part of the six year old me knew that I wanted to write. Despite the years cascading over me that urge hasn’t dulled. I’ve been a lifelong avid reader and can no more be without a book than I can do without my arms. My inspiration is the multitude of stories I’ve read during my lifetime.  Although my own writing bears little relation to theirs I’d especially mention Douglas Adams’s work and Terry Pratchett’s. Adams is already posthumously recognised as a legend. Pratchett as he bravely battles with Alzheimer's I don’t believe will ever get the recognition he deserves. YES his work is popular in just about every country in the world but it’s only fantasy right? WRONG. Pratchett is perhaps best character writer of his generation. The humanity and compassion he conveys in his fiction is breathtaking.

How
As for my own writing I am by no means a natural. I’m an idea man. An ending will come to me, I scribble it down and then I have to drag the words kicking and screaming from my head into some semblance of order. Whilst this process sounds painful because I am a natural masochist I actually enjoy it. Joking aside I love the idea that my words might entertain someone and stimulate emotions in them. This is what writing is about – conveying an idea, having an effect on others. As I write longer fiction I find I am planning more and this most definitely helps.

When
I don’t write every day. I write in fits and starts. When I’m “in the zone” I’ll write every day until a project is finished. I then might have weeks where I don’t write anything at all, except the odd short review. I always have a story on the go even if it’s just a few lines put down to be worked on later. Finding time is difficult sometimes but then again no one is holding a deadline axe over my head. I’ve always a few things on the go even if that just means ideas written down that I know I’ll come back to later. My best writing time is in the quiet of morning when everyone is in bed.

What
I draw inspiration from all parts of my life. Sometimes it’s people I’ve met. Maybe a conversation I’ve overheard or just a strange thing in day to day life. My Tales From The Longcroft Estate are drawn largely from my childhood growing up living in between two very large housing estates. I roam those streets in my mind when I'm seeking to flesh out the Longcroft stories with colour. Whilst I’m largely a short story writer the more I write the longer the stories seem to be getting. I like the idea of this as a sort of natural progression. Look out for novelettes and novella by me next year.

I always have three or four books on the go. I’ve just finished The Wind Through The Keyhole by Stephen King. A must read for fans of the Dark Tower series. I’m just about to start City of Heretics by Heath Lowrance. Following on from that I have lots and lots on my kindle to read.

If I was to recommend a writer at the moment I’d urge your readers to go for 18 Days by Allen Miles a novella just published by Byker Books. Allen is a friend and a very talented writer. His descriptive writing will draw you in and he is totally unafraid to explore dark ideas. There’s bravery to his writing and because of this his writing isn’t always a “comfortable” read. However, if you read 18 Days I know you’ll be happy with the story. An up and coming writer to watch out
for.